It was a hot humid February morning and we were out on our walking patrol, along the Makhutswi River, on the Greater Makalali Nature Reserve. Our patrols goals are to locate and report on animals and/or signs of these animals. 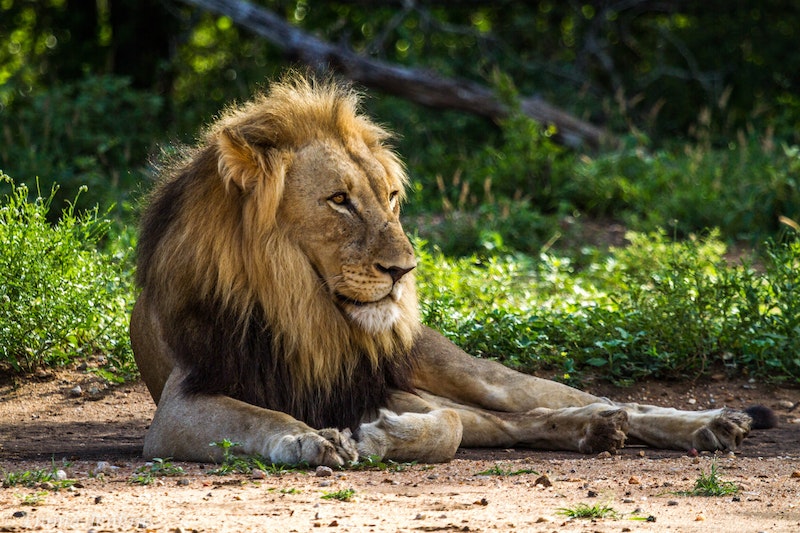 We were walking East from Tegwane Pools and had seen a pod of hippopotamus in the river, but had not seen any fresh tracks or signs of any other animal. We proceeded on the Northern bank but as there was not much new activity. I decided to cross the river to the South. As we went down into the riparian vegetation which was much thicker, the lions growled at us. I was not expecting them as they must have been moving West so left no tracks for us to see on our approach.

In the video, you can hear me swear loudly (Lions don't understand swear words but they can be shouted louder than saying "Shew" and it frankly makes you feel better and comes out aggressively). As I move away, I shout my own version of a growl. As I retreat, we see cubs emerge from the undergrowth. Any female animal with young is potentially more dangerous. I also had loaded my weapon in precaution on the first growl, just in case one or more of the females charged us. Lucky, none did. You can also see in the video the female actually turns away from us as we moved out of the river, a clear sign she was relaxing. Opening up space early often reduces the tension between the animal and yourself. However, you have to retreat only once they back off or show signs of calming. You will also see I retreat facing them. If you break off eye contact or turn your back, lions may take the opportunity to charge and attack. With lions, the goal is to remain calm, but show outward aggression towards them, shouting loudly and keeping up the sound if they advance or growl at you, maintain eye contact (aggressive posturing by you), stand tall and only retreat when they back off or turn.

Normally, an encounter like this is exciting enough and does not happen that often, but as we backed out of the river a herd of elephants were there. They must have also been moving West along the river and potentially causing the lions to move towards us. It is not clear in the video of the numbers, but if my memory is correct it was the herd we call Queenies Herd which numbers 16 animals, and Bombyx a bull elephant was in musth was with them. To make it potentially more dangerous you see in the video there is a very young elephant calf.

We had the lions behind us and we were now out of the river away from the larger trees and had a medium-sized Knob-thorn tree, lucky pushed over, lying in front of us. This gave us some barrier between us and the elephants, probably not enough to stop one if it charged through. There was also a younger bull to our right in the river, who I did not want to come out to where we were. I can be heard calling to the elephants and making a noise, you may ask why attract attention to ourselves. I made this decision as minutes before I was yelling at the lions, so the elephants were already aware we were there, then secondly I felt presenting ourselves the better option in case the herd chose to come out of the river towards us and surprising them would have been potentially more dangerous, as previously mentioned our point of safety was only a medium Knob-thorn tree and at the time I had no other point I felt comfortable to move to. So presenting and keeping up the talking to the elephants alerted them to where we were and they had the option to take another path that would avoid us. Animals often choose to avoid human contact when they have the space to do so. Potentially dangerous animals such as elephants, if surprised, often react aggressively in defence, which can have tragic results for them. If I shoot or for us if I miss, both options should be avoided at all costs.

In the end, all worked out, both the lions and the elephants understood my communication with them, likewise, I understood their communication to us and we all went our separate ways safely. Exciting yes, do I go out on every walk to have such an experience, no. It is important to always remember when we enter wild animals territory we potentially risk their lives, as we carry heavy calibre rifles, and we do not want to put them in a position where they feel threatened to the point where they feel their only option is to attack us. We do not want to use our rifles in defence, so caution, awareness, quick decisions and communication is vital to keep everyone safe.

Enjoy this amazing experience with us!

The Siyafunda Endangered Species Project will allow you to participate with on the ground, hands on monitoring of some of Africa’s endangered species: Rhino, Cheetah and Southern Ground Hornbill.

A unique experience in the African bush that gives you the opportunity to observe and be a part of the research and monitoring teams on the reserve. Special focus on elephants, lions & hyenas