Stories and anecdotes about Black Rhino

These are my stories and stories from others I have spoken to, about our experiences with a black rhino. This is not a textbook nor a definitive guide to black rhino behaviour. However, from the literature that I have seen, there seems to be a one size fits all approach to approaching them on foot or vehicle and that is simply to get the hell out of there as they are aggressive and dangerous. This is over-simplistic and what if you can not get out of their way? What then? 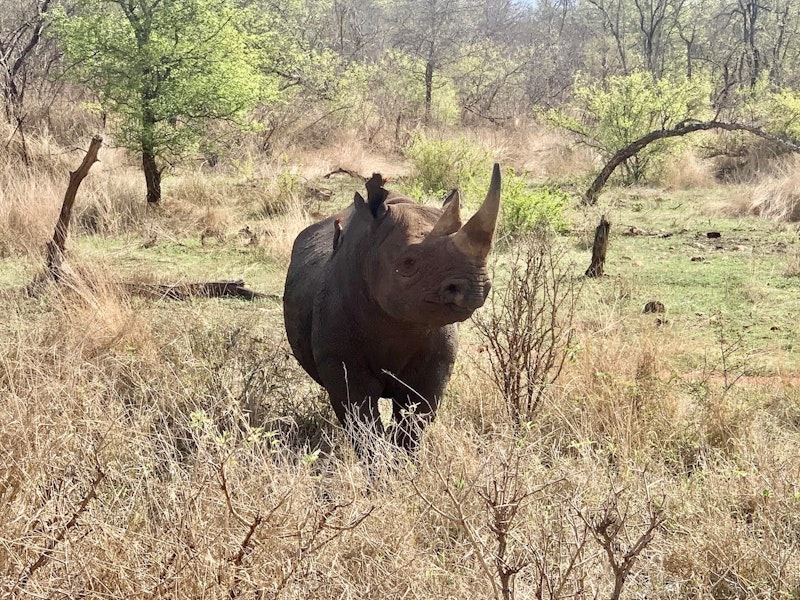 As an introduction based on my experiences, not all black rhino are aggressive, some are actually quite calm. I think it is best to describe black rhino as extremely unpredictable, rather than label them all aggressive, as this ignores them as individuals and the situation they find themselves in. I am lucky to have been able to spend time with these animals and learn individuals behaviours, to some extent. I think as a guide walking or driving in a reserve where you are lucky to find these animals and if you can not identify the individual, caution should be taken and the assumption they may charge should be taken. It is the uncertainty of what they will do that is important to be conscious of. Another doctrine is that if a black rhino charges it won't stop or break off its charge. This is also not true and I will show this in the following stories.

My Black Rhino Charge On Foot.

Let me start with one of my experiences, I also have a video of this incident which sheds a bit of light on what happened, but not all. It was July 2018 (my birthday month, I seem to get into pickles often close to my birthday, see my blog about Splay) I had a school leadership group ages 16 and 17 and I had set out to walk with them and discuss various leadership aspects of being a trails guide, and also introduce them to some of the practical skills we use to track animals and the use of Telemetry to find animals which have trackers on them. On my notes for the day, I wrote "check for Feketha", who was a dominant male black rhino, in the area I was walking. Immediately after being dropped off I checked for the signal for him and got no beep on the telemetry. It was what I was hoping for as negotiating meeting him was not on the agenda for the morning. We set off and within 100 meters of the walk I saw 2 rhino ahead of us on the ridge, binoculars came out, they were black rhino, who were they? I checked ear markings and saw the hole in the closest one, right ear, FEKETHA! The collar battery was dead.

Reaction: find a point of safety. Behind us, 30 meters away was a pushed over Marula Tree. We retreated to it quietly, but as we climbed behind it, one of us snapped a twig. That was all the rhino needed to pick up that we were there. He immediately walked towards us. Now the adrenaline started to flow and decisions had to be made. I had 4 boys, their teacher and my unarmed backup and the Marula Tree, while large, was well eaten by termites and wood borers and suddenly did not look too solid. Also in my mind, this particular rhino had hit a car in the past. I thought if he runs into this tree the damage could be caused by it being pushed onto us. I decided to draw the rhino away from the group and get him to move off.

I stood up and clicked my fingers and walked to my left, the rhino put all its focus onto me and my group remained quiet and sat behind their point of safety. As I moved off he kept approaching me, so in an attempt to deter him and get him to move away, I shouted at him. My shouts did not deter him at all, firstly he kept on coming in stops and starts, secondly, it allowed him to know exactly where I was. In the video you will hear me shout and use some swear words, the video then focuses on me briefly and you will see my hand goes to the clip on my backpack. This is important as my idea was to throw out my backpack, to hopefully get him to take his aggression out on it, and then allow me to move to a tree or other point of safety. Also to note, I did not load my weapon during this confrontation, I was employing all my other techniques to deter him and he was not endangering the group I was leading. When he did charge, I threw my bag and as it hit the ground in front of him, he turned away running past my group behind the tree. As he disappeared, I gathered my group and we headed in the opposite direction. I did not want to wait around in case he returned.

The second rhino was a female but she did not approach us and moved away. In the short time the rhino charged me and he turned, he flushed a scrub hare, which is not really of importance, but it shows the detail I could see when my adrenaline was up (also scrub hares will feature in other rhino stories to come)

My takeaways from this experience, is black rhino do break off charges. This came about because I threw out my backpack. The question is why this caused him to halt and turn? Based on my other experience and that of my other guides, is that the animal had all its attention on me and suddenly there was another presence close by it, that he was not expecting. Black rhinos are nervous/skittish animals and I assume he suddenly felt surrounded and chose to retreat as he was not certain about what he was dealing with. It will also be evident in future stories that noises or distractions do cause them to move off. From what I have learned from previous experiences, shouting at them or making a noise is probably not a good idea. I am leaning towards silence when close to them and then reliance on a stone throw to the side of them or in front of them to turn them. Shouting only made me feel better, and he took it as a challenge. On reflection afterwards, did I do the correct thing by drawing him away from the group? I think at the time the answer is yes, as he never knew there were others with me and did not threaten them and I was not forced to use my weapon. If I was to do it again, I may be inclined to remain quiet and hidden and deploy a stick or stone throw to turn him, but I may still choose to draw the rhino away from the group (only if I have a back up). I am also not sure this would work, so why change what did work? Anyway questions to ponder and time to see if a new approach may be appropriate during another but a different encounter with a black rhino.

Explore the vast and wonderful Makalali Game Reserve on foot!

My Kaya Safari's in collaboration with Siyafunda offers a unique backpacking experience. Come & join our team of field rangers on their walking patrols through the Greater Makalali Nature Reserve and assist them with monitoring of our threatened big game.

A unique experience in the African bush that gives you the opportunity to observe and be a part of the research and monitoring teams on the reserve. Special focus on elephants, lions & hyenas